If you are someone who suffers from toenail fungus, chances are you are struggling to find an effective cure for your condition. Prescription treatments recommended by doctors are often difficult to follow and have serious side effects. It’s not surprising that alternative, home remedies are being sought out and tried. Vicks VapoRub for toenail fungus is one such treatment that is being touted by some. But, is it a viable option? Here are some facts you might want to consider before following this treatment plan. 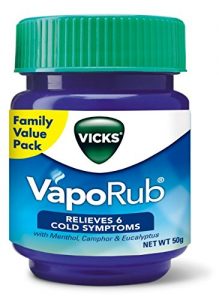 As you probably know, Vicks Vapor Rub is an over the counter ointment used topically to treat coughs and colds.  It has not been approved by the FDA for the treatment of toenail fungus but some people are using it for that purpose anyway. The Vicks Vaporub toenail treatment plan consists of rubbing Vicks into the infected nail two times a day for six to sixteen months. The theory is that there is something in the Vicks (the blend of menthol, camphor and eucalyptus oil) that, in time, will kill the infection so the nail can heal. Sounds simple enough, but does this method work?

The Facts about Vicks Vaporub for Toenail Fungus

The truth of the matter is, toe nail fungus is extremely difficult to treat and even the best treatments have less than stellar results, particularly when the infection is severe. Research has shown that the best likelihood of obtaining a cure is to begin treatment very early and at the first signs of infection.

There are currently two types of treatment approved by the FDA for treating fungal nail infections: oral and topical. The traditional option that has shown the best success rate is Lamisil, an oral prescription medication. It has about a 50% cure rate, but it also has unpleasant and potentially serious side effects. Permanent liver damage is one such side effect. Prescription medications must also be used for extended periods of time and often interferes with other commonly used medications, such as antibiotics and antidepressants.

Compared to prescription medications, Vicks is even less promising as a cure despite treatment that can last over a year. Several studies have been conducted in an attempt to ascertain the effectiveness of Vicks Vaporub for toenail fungus. The results revealed that when Vicks was applied to the infected area on a daily basis, 65% of the participants said it was ineffective. It also seems that once you quit using the Vicks treatment, the infection is very likely to return.

Pros and Cons of Vicks Vaporub for Toenail Fungus

It does seem that a number of people have found some relief from this difficult problem by using Vicks. On the plus side, it has minimal side effects relative to the traditional treatment methods and is a product that is both easy to find and inexpensive to buy.

However, Vicks has been shown to be ineffective for the majority of people even when used for extended periods of time and the longer you use any treatment, the more costly it becomes. Some individuals have found that it irritates the skin surrounding the nail and are bothered by the strong smell. It seems that even in the best of circumstances, treating toenail fungus with Vicks is just a temporary stop gap as the infection generally returns once the treatment has been stopped. The bottom line is that like all home remedies, it is wise to proceed with a healthy dose of caution and a little bit of common sense when considering Vicks Vapor Rub for the treatment of toenail fungus.